Get the details and current updates...

This town is made for walking...and that’s just what you’ll do.

Avalon is easy to navigate on foot. While strolling along the waterfront is fun, visiting the charming shops and seaside restaurants; the best way to appreciate the heritage of Avalon is to walk its residential streets and observe island residents at a relaxed pace, away from the hustle and bustle of the popular beach front.

The town of Avalon was originally laid out in the late 1880’s by George Shatto. The beautiful crescent beach was used as a tent site by a few mainlanders who came to fish the shores of Catalina Island. Shatto, hoping to create a more permanent resort community, and to make a quick profit in real estate, built the Hotel Metropole and a wharf to accommodate island visitors. In 1887, Shatto hired surveyors to plot streets for the town on the flat land behind the crescent shaped bay. Most of the home sites were tent sites, just 20 feet wide, making the newly created lots very narrow. Shattos’ sister-in-law, Etta Marilla Whitney, named the town Avalon, after a phrase out of Alfred Tennyson’s Idylls of the King, a King Arthur Saga. Unfortunately, after 4 years, without a strong real estate market, Mr. Shatto went into foreclosure. Catalina Island was then acquired by three Banning brothers, sons of Phineas Banning, a pioneer in stagecoach and steamship transportation, founder of the city of Wilmington, the Wilmington Transportation Co. and the port of Los Angeles.

The Banning brothers formed the Santa Catalina Island Company to market Avalon as a resort destination. Avalon gained an international reputation for big game fishing and visitors enjoyed trips to Avalon to swim the clear waters, sightsee on the glass-bottom boats (which were invented in Avalon in the 1890’s), golf on one of the first courses in southern California (built in 1892), and dance the night away to big band concerts. Avalon incorporated as a city in June of 1913 with just 500 residents. The city suffered a terrible tragedy when a fire, known as the Great Fire of 1915, burned down much of the town's buildings and many of its hotels.

William Wrigley, Jr. purchased controlling interest in the Santa Catalina Island Company and Catalina Island in 1919. For the next ten years, Mr. Wrigley undertook an ambitious economic development program, building the Catalina Country Club, Bird Park, and the legendary Catalina Casino Building. He transported visitors to the island aboard two steamships, the S.S. Avalon and S.S. Catalina. Many of the homes in Avalon were also built during this time period.

William Wrigley’s son, Philip Knight Wrigley, continued developing the Island resort after his father's passing. He ushered in the Big Band era at the Catalina Casino, redesigned the beachfront Crescent Avenue with an early California feel, and built the mountain top Airport-in-the-Sky.

Avalon is a delightful residential community with a rich legacy of charming cottages, beautiful homes and historic buildings. While in Avalon, take one or both of these walks. You’ll gain an understanding of the history of the community, while exploring the quaint residential streets at your own pace. 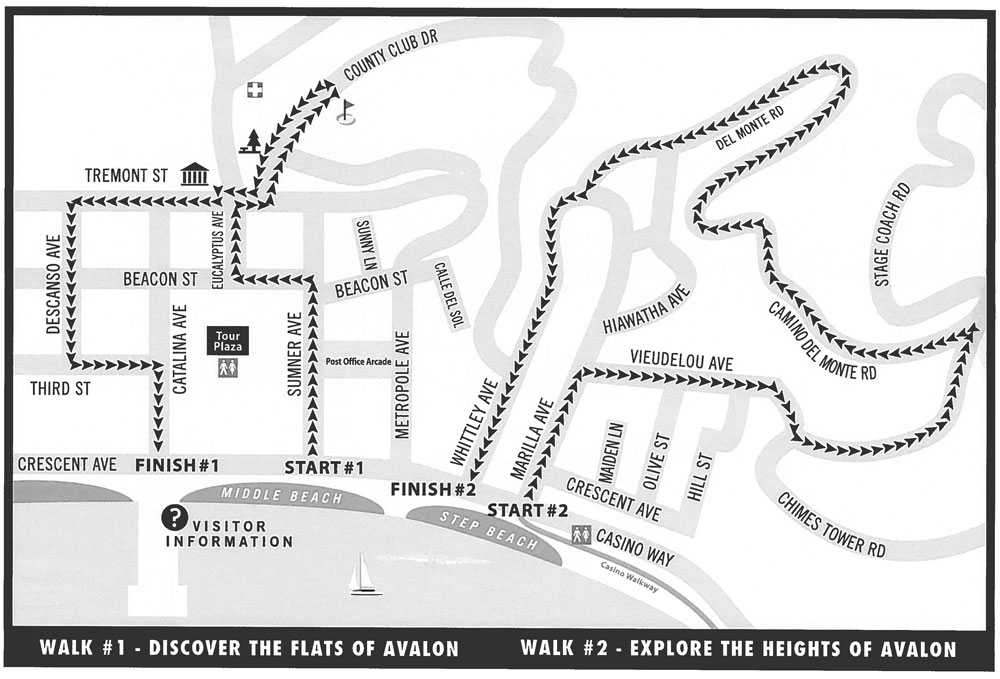 Walk #1: Discover the “Flats of Avalon”

This leisurely stroll will take you through the residential areas on the “flats” of Avalon. The walk is mostly level with one very short uphill section, and will take approximately 45 minutes.

From Crescent Avenue and the Cabrillo Fountain at Wrigley Plaza, walk up Sumner Avenue. On the right is the storefront for Catalina Crafters, adorned by beautiful and historic Catalina Island tiles. On the left is the four-story Glenmore Plaza Hotel, originally built in 1892 (renovated in 2018) and the oldest hotel in Avalon, having survived the Great Fire of 1915.

Further along to the right is the Los Angeles County complex, which includes the Avalon Public Library, the Justice Court and the Sheriff’s Department. Avalon is part of Los Angeles County and the city contracts for these services. The County complex is built on the former homesite of William Banning, one of the Banning Brothers, and the father of famous WWII leader General George S. Patton Jr., who met his wife on Catalina Island in the early 1900’s.

Across from the Avalon Public Library is the Island Tour Plaza, where tour buses and hummers load visitors to take them into Catalina's interior. Restrooms are located in the Tour Plaza (get the passcode from the Mini Golf kiosk). Between the two restroom entrances you’ll notice a colorful Catalina Tile fountain. This fountain was originally park of Bird Park, the aviary built by Wrigley.

Just past the Island Tour Plaza are the Mini Golf Gardens, a challenging 18-hole miniature golf course which opened in 1973. Continuing up Sumner Avenue, you will find our brand new grocery store, Vons, which celebrated its grand opening in January 2019.

At the corner of Sumner and Beacon just past Vons, turn left, and then turn right onto Eucalyptus, the first street on your right. This quiet street is closed to vehicular traffic and is lined by small, charming historic cottages, many of which have been remodeled. Walking the length of Eucalyptus, you’ll notice that it is the only street in Avalon that has two trees growing in the middle of it.

At the end of Eucalyptus, cross Tremont Street and head up Avalon Canyon Street to Country Club Drive. This is where the road gets a little steep. Head up the hill for a short ½ block walk and you will arrive at the Catalina Country Club, the former home to William Wrigley Jr’s. Chicago Cubs spring training camp. It’s also the home of the Catalina Golf Course, the oldest operating golf course west of the Mississippi. It was home to the famed Bobby Jones Tournament from 1931-1955.  The Catalina Island Country Club is a striking example of Early California Revival architecture, with cream colored walls, deep green trim and a Spanish tile roof. Its stunning courtyard, dining room, boardroom, bay room and casual pub make a perfect venue for small meetings and weddings.

From the Country Club, double-back down the hill to the traffic circle (known as “5 Corners” to locals) and you’ll see the cream colored building and red roofs of the Avalon City Hall complex to the left, near the corner of Avalon Canyon and Tremont, where approximately 50 city employees work. From here, cross and turn right onto Tremont and go past the cluster of garden cottages on your right. To your left are the streets leading back to the beach. Turn left down Descanso Avenue and you’ll again capture the residential flavor of Avalon in the 1920’s when many of these homes were the first pre-cut tract homes erected by the Santa Catalina Island Company. Some of the homes still retain the one level peaked and capped roof style of the early days.

Continue down Descanso for 2 blocks. You will notice that many of the houses have small driveways, just big enough for a golf cart. If you look at the corner of Descanso and Third, on the right is a two-story white house. This house is constructed from the cabins of the Banning brothers’ old steamer tugs, the SS Warrior and SS Falcon, which were used to bring visitors to Avalon at the turn of the 19th century.

At Third St take a left and head to the next street, Catalina Avenue. Take a right at the corner and you’ll be heading back to the waterfront and Crescent Avenue, where your journey began.

Walk #2: Explore the “Heights of Avalon”

This walk will take you through some of the residential streets and commercial areas and up into the heights of Avalon.  The walk is a bit of an uphill walk at first, then levels out and sets off downhill. This walk will take approximately one hour.

Head up Marilla Avenue, left of Island Spa Catalina, to the first street on your right, Vieudelou Avenue (French for “view of the water”).  The house on the left corner as you turn onto Vieudelou is the oldest house in Avalon, one of the few structures in town surviving the 1915 fire. Two-thirds of the way up Vieudelou, on the left-hand side, you will see the former Catholic Church, now a private residence.

Continue up the hill, known as “Vinegar Hill”, named from the Prohibition times when the locals in the area would indulge in the making of moonshine. Periodic raids by the revenuers would break up the operations and dump the whole mess down the street.  As the moonshine fermented in the streets, it caused the area to smell of vinegar, hence the nickname Vinegar Hill.

As the street curves to the right, at the outside of the bend is a shady garden garden spot with a bench. Take a rest as the street continues to go uphill a bit further. Stage Road will be just the next road to the left and follow that up the hill. You’ll come to a fork in the road where there is a pleasant garden and another bench. Keep to your left and follow the road along the heights of Avalon. You will be looking over the sunny western area of Avalon towards a splendid view of the entire town and the bay and the channel beyond to the mainland. There are splendid views from this area and some new homes are being built to take full advantage of the views, so be mindful of the new construction.

Continue straight until you arrive at upper Whittley Avenue with Spanish style homes across the street and to your right that were built in the 1920’s. Take a left down the hill and you will be walking past a variety of styles of homes from almost every decade.

On the left side of Whittley is the Pacific Bell Telephone company building, decorated in historic Catalina Tile. The last manual switchboard in the Bell system was in operation here until 1978. Just past the telephone building on the left side in the historic Hotel Catalina. The first Hotel Catalina burned down in a fire in 1915, but was quickly rebuilt.

Continue down Whittley toward the water and you will reach Crescent Avenue again, just a short ½ block away from where you started.